← more from
Grimalkin Records
Get fresh music recommendations delivered to your inbox every Friday.
We've updated our Terms of Use. You can review the changes here. 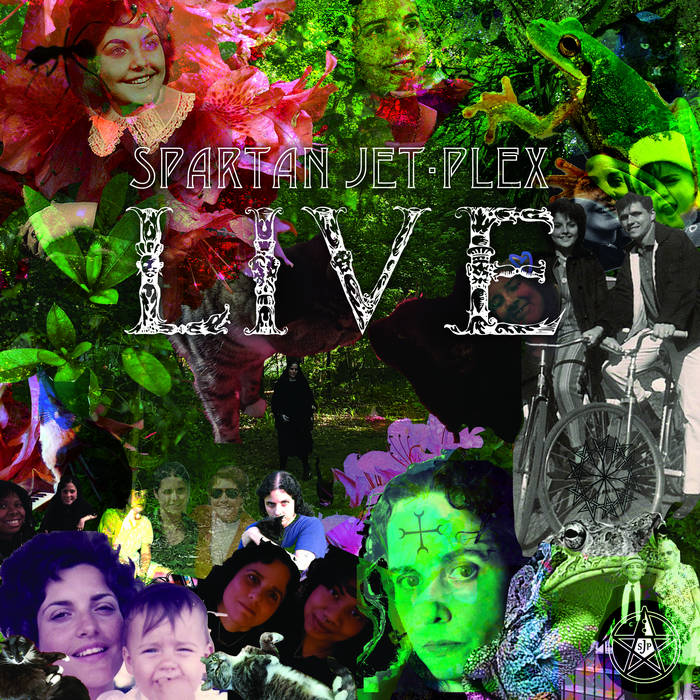 September 13, 2020: Spartan Jet-Plex aka Nancy Grim Kells (they/them) is a founding member of Gr and lives in rural Virginia a little over an hour south of Richmond. Live releases on the 10th anniversary of the death of Kells' mom and the song Circle is specifically about her.

This past summer also marks the 12th anniversary of Kells living in rural Virginia, which to Kells "is like a strange backwards mirror to the 12 years previously when I was living in Los Angeles. Most people move to LA to find themselves or find something. I moved there to experience life differently, but it wasn't until I left Los Angels and moved here that I found my queer family and felt part of a music community." Although writing and recording music for over 20 years, it was not until 2019 that Kells started playing shows as Spartan Jet-Plex. Kells goes deep in this interview with The All Scene Eye on how playing their music out and honing their mastering skills by remastering older albums has reshaped and helped them reimagine their music in new ways.
theallsceneeye.com/2020/04/08/spartan-jet-plex-on-remastering-reimagining-and-growing-at-their-own-pace/

On playing out and their new album, Kells explains, "I specifically started with just guitar and vocals knowing I would want to add in other things later once I felt comfortable and happy with my ability to play a set live. It's difficult to capture what I do on records in a live setting so I decided just to do stripped down versions and work on mastering that. I doubt I ever will, but I played out quite frequently and I was getting better, more confident and less nervous, although I doubt I will ever not feel nervous playing live. After playing out a while, I imagined making transition pieces that I could play between songs. I do this a lot on my albums and on several past album tracks. From there, I decided to create an album that would sound like I am hoping my live sets will be like once playing out is a thing again. It was on my mind quite a bit, and after the pandemic began and I was laid off, I finally decided that this was a good opportunity to work on this idea. When I play live again, the transition pieces I created on this album will be played between songs."

This release also contains a secret album of field recordings that Kells has been collecting since moving to Virginia in 2008. It will be available to those who purchase and download Live. Lastly, Kells created a film version of Live with collaborator and Gr member, Rafael de Toledo Pedroso, and their partner Pedro Pedrosa. They used footage of Kells' yard, home and cats juxtaposed with footage of life in Rafael's and Pedro's towns in Paraná and Rio de Janeiro in Brazil. Rafa also did all the editing and effects for the film. Kells plans to use a version of this film as a backdrop for their live sets in the future. The songs from Live are also available as individual music videos.

There's a dual meaning in the title Live. Although Kells is once again reflecting on the struggles and meanings in life and death this album also celebrates life and living and how Virginia has truly TRANSformed their life in various ways for the better. Through this living also came Grimalkin, which was born from their love of teaching, facilitating, grassroots organizing, mutual aid, community, found family, advocacy, and music.

Proceeds from this album go to Gr's label and mutual aid fund.

All music was written, produced, recorded, mixed, and mastered by Nancy Grim Kells in their living room .

Additional artwork for stickers and pins by Alfred. (they/them).

Proceeds from this album go to Gr's label and mutual aid fund.

Huge thanks to Taylor and The All Scene Eye for premiering this album: theallsceneeye.com/2020/09/12/premiere-on-a-new-visual-album-spartan-jet-plex-isnt-just-surviving/

Huge thanks to Mekenna and Slug Mag for covering this release: www.slugmag.com/music/reviews-music/national-music-reviews/spartan-jet-plex-live/

Huge thanks to Lloyd and God Is In the TV for premiering the song and video Dreambreak and the pre-order: www.godisinthetvzine.co.uk/2020/07/31/exclusive-spartan-jet-plex-dreambreak-music-video-premiere/

Huge thanks to Ryan and Pastel Wasteland for premiering the song and video Circle: pastelwasteland.com/music/spartan-jet-plex-circle-premiere-%f0%9f%87%ba%f0%9f%87%b8/

Huge thanks to Louis and MEFD for premiering the song and video for NB: www.mesenceintesfontdefaut.com/2020/09/02/exclusivite-spartan-jet-plex-nb-video/

Huge thanks to Liam and Various Small Flames for taking the time to interview me and write this kind review: varioussmallflames.co.uk/2020/10/29/interview-spartan-jet-plex-live/

Huge thanks to Chris and the Boston Hassle for this: bostonhassle.com/spartan-jet-plex-live/

I am cells inside a cell.

Hear my interview/chat with Norman B of Life Elsewhere: lifeelsewhere.co/2016/08/11/nancy-kells-deserves-your-attention/

If you want to support a queer/trans/nb/poc/women focused label, Grimalkin Records, you can Paypal me directly at spartanjetplex@gmail.com

You can also send submissions to spartanjetplex@gmail.com ... more

Bandcamp Daily  your guide to the world of Bandcamp

Oakland producer Mejiwahn chats about his breezy and transportive LP.